On Monday 17 October 2016 in a side event held on the margins of the seventy-first session of the First Committee entitled, “Small Arms and Light Weapons: The Road to the 2018 Review Conference,” four panellists laid down the groundwork that remains ahead in combating the dangers and threats of armed violence.

The event was moderated by Titta Maja, Minister Counsellor at the Permanent Mission of Finland in Geneva. Christoph Anton, Counsellor for the Permanent Mission of Germany to the United Nations, was the first to take the floor. Stating that 200,000 people are killed each year by Small Arms and Light Weapons (SALW), he noted SALW’s effects by causing migration flows of thousands of people, and how they contribute to the destabilization of entire regions and to devastating humanitarian crises. “We have a common interest in combating this problem,” he told a room full of participants, adding that Germany has been supporting the UN Programme of Action (PoA) on Small Arms and Light Weapons (SALW) since its inception – a framework for activities to counter the illicit trade in SALW. Mr. Anton mentioned target 16.4 of the 2030 Agenda for Sustainable Development, which aims to reduce illicit financial and arms flows, as an opportunity for improving cooperation among States.

Next was Jasmin Nario Galace representing the International Action Network on Small Arms (IANSA) Women’s Network. Issues of gender and women’s role and participation in addressing armed violence, are often relegated to the margins, despite the urgent need for it to take a more central role. Ms. Galace mentioned the Fifth Biennial Meeting of States to Consider Implementation of the PoA (BMS5), noting that it called for the facilitation of women’s participation and inclusion as well as the access to training. Following the BMS6, which was held in June 2016 and was the last meeting before the 2018 3rd Review Conference (RevCon3), important questions remain regarding States’ commitments and adherence to its recommendations.

Ms. Galace said, a better understanding of the root causes of armed violence and terrorism remains a challenge, as well as finding non-violent pathways to resolving conflicts. The role of survivors as well as that of health professionals could be significant in order to get their perspectives. Emphasis also should be placed on advancing “peace education,” starting from a young age. Armed violence should also be regarded as a public health issue, rather than just a security one. 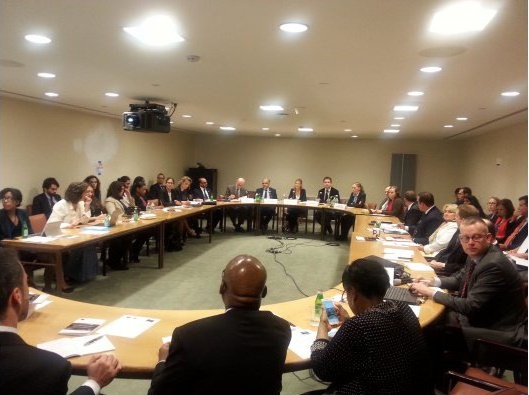 Daniel Prins, Chief of the Conventional Arms Branch in the UN Office for Disarmament Affairs, touched upon the 2030 Agenda for Sustainable Development and on challenges in new SALW technology.

The final speaker was Baffour Amoa, Chair of IANSA. Mr. Amoa said that while there was some decrease in instances of armed violence across the world in the early 2000s, levels of armed conflict are back up, similar to its peak in 1990s. He said 500,000 people are killed each year in armed conflict, as progress in the implementation of the recommendations of the PoA has been slow. But there have been some achievements too. Between the years 2002-2011, 158 States submitted reports at least once on the transfer of SALW. Other challenges remain in the fact that few states truly authenticate, mark their weapons efficiently or effectively manage their inventories. Stockpile transports, management of surplus as well as the destruction of illicit, ceased or confiscate weapons also remain big hurdles in the road ahead.